Previous methods of bat and bird mortality monitoring usually assumed that all carcasses found near wind turbines are victims of collisions with them. Let’s imagine you are Sherlock Holmes and you conduct small investigation into the death eagle found under a wind turbine. Here we go.

It is forgotten that animals mostly die as a result of aging, disease, starvation and predation. Weakened old or sick bats and birds land on the ground and slowly die or are eaten by a predator. When such cases occur near the turbines, they can be considered to be victims of collisions. The same can happen in the case of victims of agricultural machines activity, hunting or collisions with vehicles near the turbines. Moreover, some dead animals can be brought in close to a given turbine from afar by predators, scavengers or … jokers.

Previous methods of mortality monitoring are usually not able to distinguish these cases from collisions with a turbine. Therefore, these carcasses may have been mistakenly classified as victims of collisions.

From the professional investigator point of view, in traditional searching on the ground we have only circumstantial legal cases. Such situations cause a lot of uncertainty about the results of such monitoring. This is especially important when, for example, carcasses of rare raptor bird species are found. For example in the U.S., according to the Bald and Golden Eagle Protection Act (16 U.S.C. 668-668c), unauthorized “taking” the eagle can results $100.000 fee and the 30-year permit for Incidental take costs $76.000. At the end we ask: what a factor is responsible for the death of the eagle?

If wind power is your business, you feel better having evidence. If you are working for Government, evidence of collision is your business too. B-finder system is solution to you – it reports only the real collisions with wind turbines. 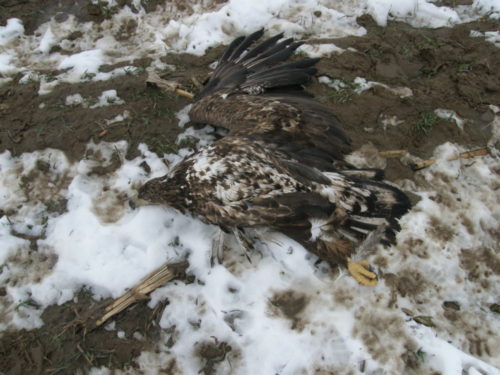